Twice, Rev. Benny McCracken took 10 kids from a juvenile detention facility in Arkansas to Colorado to hike in the Rockies.   Fundraising brought in enough cash for food and appropriate clothes, the facility chipped in gas money, and off he trucked in a van across Arkansas, Oklahoma, Kansas, and Colorado with 10 troubled kids, the facility psychologist, and a counselor to camp out and roam the mountains.  TWICE he did this…  “That’s a lot of togetherness with 10 juvenile delinquents,” McCracken says. “I look back now and think it’s a good thing I was young.”

“We would train physically to go,” McCracken recalls.  “And one little guy stopped one day and asked me, ‘Mr. Chaplain, are the mountains in Colorado bigger than these trees?’ It was a pretty incredible experience for them.  We would talk at night about what they learned and how they could take that back to their lives.”  Knowing the leader of their mountain adventure had been legally blind since age 16 surely magnified the potential for life-changing impact.

The thought of Rev. McCracken navigating his way through the mountains with 10 kids and two novice hikers is less surprising when you realize he has been way-finding since he was a teenager growing up in Arkansas.  Whether hiking in the wilderness, searching out resources, or self-teaching technologies as they become available, McCracken is a dedicated pathfinder.

McCracken was 16 years old when his vision dramatically deteriorated. In search of answers, he spent three weeks in a hospital in Little Rock.  Doctors had two initial questions:  Did he have diabetes, and had he ever drunk white lightening?  “I’ll never forget that,” McCracken laughs. “Bad white lightening can cause blindness, and the Ozark hills were known for white lightening.  There were stills all over those mountains.”  After multiple tests, the doctors informed the young man, “We don’t know what it is.  Just go and do the best you can.” 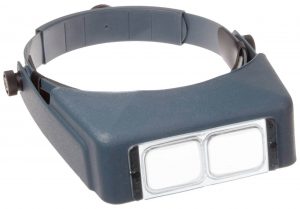 It would take a decade to get a diagnosis:  Stargardt Disease. But the day McCracken was discharged from the hospital was also the same day he found his first piece of assistive technology.  Wandering the streets of Little Rock while waiting for his bus, he bought an Optivisor he spotted in a photography shop window.  From that point, searching out resources to meet his goals became a way of life.

As a senior in high school, McCracken connected with Arkansas’ Rehabilitation of the Blind and acquired a machine to play audio books recorded on 7.5-rpm vinyl discs.  As a college student, McCracken would send text books to Recordings for the Blind and Dyslexic in New Jersey a semester in advance.  Approximately six months later, he would receive his text book recorded on a reel.  With careful planning and a willingness to embrace the technology available, McCracken would earn a master’s degree in theology, a master’s in education, and a doctorate of ministry in pastoral counseling.

For the next 15 years, McCracken would serve as chaplain in the juvenile correction facility followed by a five-year stint as chaplain in a men’s prison.  The work was rewarding, but “I got tired of looking at the world through fences and barbed wire,” he remembers. “And that’s when I started hiking.”  His love for hiking would eventually lead him to Montana, where he currently pastors the First Baptist Church in West Yellowstone. 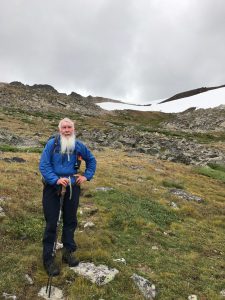 Here, McCracken hikes, cross-country skis, and snowshoes year round.  As his visual acuity has decreased, hiking is becoming more difficult.  “I’m experiencing some limitations,” he admits. “It was hard coming out of the mountains this summer. It was sad realizing some places I love to go I probably won’t be able to get to again.  But you accept those limitations and you live with them and you go on. You don’t give up.”

True to form, McCracken is currently assessing how the app, Seeing AI, might enhance his hiking experience.  Microsoft released Seeing AI in July, for use with iPhones and iPads. Seeing AI can read text aloud and identify bar codes. Its claim to fame, however, is the ability to use your device’s camera to identify people and objects and ‘see them aloud’ for a person with vision impairment.  Reviewers have noted the app needs improvement in this last area, and that is what McCracken is discovering as he takes Seeing AI to the great outdoors.

Recently, McCracken used Seeing AI to find the restroom in a restaurant.  “When you can’t see the signs on the bathroom doors, it can be a tenuous situation,” he reports.  “But I saw the door, and from about eight feet away I held up the phone and the phone said, ‘women.’”  So, A+ for indoor navigation of a restaurant.  Outdoors, the scene processing feature did not shine.  Walking in Yellowstone Park, McCracken found a herd of bison. Seeing AI ‘saw’ “Probably cattle grazing in a field.”

One major drawback from McCracken’s perspective is that the app only works if you have cell service, which is no good in the back country.  An additional frustration:  McCracken’s Voice Over feature can read the ‘save’ and ‘send’ buttons on the AI screen, but doesn’t recognize the ‘cancel’ button. 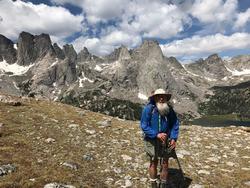 Despite these shortfalls, McCracken says he’s excited about the app’s potential.  “I’m anxious to play with it some more,” he says. “I don’t think anything is going to be as good as the eyes God gave us, but it’s far above anything I have used before. This is going to put KNFB Reader on the back page before too long.”

Hopefully continued improvements to Seeing AI will make it a valuable tool for McCracken’s outdoor adventures. Regardless, the mere existence of this technology is exciting.  “From an Optivisor in a window of a photography shop in Little Rock to what I’ve got today?” he says. “It’s an incredible journey. It’s just amazing.”