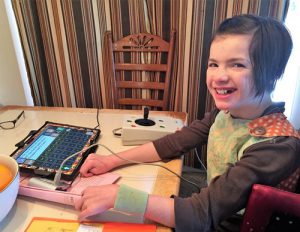 Twelve-year-old Katie Hill is kind of a media star these days. Katie has a genetic movement disorder and is nonverbal, and her quest to find a better speech-generating device (SGD) has garnered the attention of the Great Falls Tribune. The Tribune has published two lengthy articles about Katie. Pair that coverage with the posting of her entry in a speech competition on a big company web site, and you can see the media attention is beginning to feel routine.

Katie’s old SGD was a touch-screen tablet with text-to-speech software. She called her SGD “Bob,” and as Bob aged, he began failing her. “Bob was very frustrating to use because it would, like, shutdown all of a sudden,” Katie explains. Katie’s ataxia also made it difficult to use Bob’s touch screen with precision.

Katie’s need for a new SGD, and her family’s search to find (and fund) the right one, prompted the Tribune to publish an article titled “Katie’s World: Living with Cerebral Palsy.” The article detailed the need for a new device for Katie, but finding the right one and the money to purchase it would be challenging.

Katie’s family decided to try the Zuvo 18. They contacted MonTECH and arranged to borrow one. Unfortunately, the device was damaged in shipping. At that point, speech therapist Kirsten Straniere emailed the maker of Zuvo (Talk to Me Technologies, TTMT) and asked for a complimentary trial. The company sent a Zuvo 12 (two inches smaller).

The family’s belief that Zuvo was the right device for Katie was validated by her trial. Funding the device was the next hurdle; Zuvo 12 is priced at $7900, minus mounting plates, joystick, and other necessary hardware. Family and friends stepped up and Katie received her own Zuvo 12 in November. Katie’s mom, Elizabeth Hill, was quoted in a Tribune article published December 22, 2016: “Sometimes the miracles come just the way you’d like them to come: the pain subsides, the issues stop or the insurance approves the device. But much more often God creates a miracle in the people who come forward — who love and make it all bearable. Not just bearable but amazing. We are incredibly blessed.”

Katie now uses her Zuvo 12, which she calls “Joy,” with a bluetooth joystick for her wheelchair. She also uses a plug-in joystick and a switch. The daunting task of learning a new communication system was not discouraging for a young lady who has known the deep frustration of being unable to express herself: “It was great having to learn how to program Joy,” she said.

Now that Katie can once again express herself verbally, she can refocus on living large. Hopefully that will involve writing, dancing, and skiing at breakneck speed. “I am such a dare devil,” she explains. “Like when I go skiing, I squeal all the way down the hill.”