“For a lot of people, an amputation is the beginning of something terrible,” Sherene Ricci explains.  “For me, it was the end of something terrible. I could finally relax and feel a little bit safe from cancer.”  Ricci, now 40, was officially a survivor of synovial sarcoma at age 14.  Seven years of being cancer-free ended when she was diagnosed once again at 21, this time with a tumor in her sciatic nerve. At 24, having exhausted her treatment options, she chose to have her right leg amputated. “That was a hard day,” she says. “If I could have told myself then where I’d be now, it would have made that day a lot easier.”  Where is Ricci now?  In January, in snowy northwestern Montana?  Odds are good she’s skiing down a mountain.

Ricci grew up in Missoula, skiing and biking.  When she got sick and began undergoing treatments, her physical activity sharply decreased.  Life post-amputation seemed dismal.  “It was very clear to me that people viewed me as a person with a disability,” Ricci remembers.  “I saw people had pity for me. You don’t want that.”   Eager to distract herself and resume some semblance of normal, she told her physical therapist she wanted to try skiing.

Learning to ski again was rough.  “It was difficult, scary, and painful,” Ricci describes. “You fall on your amputated limb and it hurts.  But to be able to do it again, to relearn it, that’s super powerful.”  Powerful, too, was seeing the response of others watching her on the slopes.  “On the hill, falling on my butt, people are proud of you. Random strangers were high-fiving me. You feel that power, and you bring it back with you, that courage.  You think, ‘I just did a blue run today.  Now I’m going to brave the grocery store and get what I need.’” 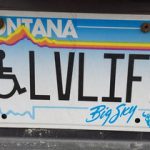 Ricci is a three track skier; she uses one regular ski plus outriggers, which are forearm crutches with miniature skis on the bottom.  She’s had some fun mono-skiing, and is currently dabbling in sit skiing. Knowing the sport is hard on her knee, she figures sit skiing may loom large in her future.  Ricci primarily skis Lookout Pass, Snowbowl, Lost Trail, Blacktail, and Discovery.  Once back on the slopes, it didn’t take long for her to pick up on the fact that people with disabilities were not able to get ski instruction at these hills; the ski hills most easily accessible and affordable for families from the Missoula area.  Ricci made it a habit to repeatedly stop in at the ski school and ask, “What do you do when ‘someone like me’ shows up?”

For years, those who inquired about lessons for a person with a disability were referred to programs like Eagle Mount and Dream Adaptive, neither of which are in Missoula.  When a new director arrived at Lookout, he was receptive to providing adaptive instruction in part because all of his prior hills offered adapted skiing. In response to Ricci’s standard question, “He said, ‘That’s a great idea, and I want you to do it,’” Ricci remembers. “He made me responsible, and made me an agent of change.”

Which is how Ricci became a ski instructor at Lookout, certified by Professional Ski Instructors of America (PSIA).  On the hill, Ricci is “Lefty” (“I got one leg left, and it’s the left.”).  Lefty gets a terrific kick out of teaching others to ski. “If you have something you love and you’re good at it, and you can share that knowledge with others, then that’s full circle,” she says. “You’re giving them a gift and you’re giving yourself a gift. That day on the mountain might be one of the 10 best days of someone’s life, and I get to be part of that!  You feed off their joy. I’m just a joy junkie.” 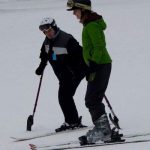 Most of Ricci’s students are able-bodied, but she believes that seeing her work on the mountain has real impact on students and nonstudents alike.  “Their preconceived ideas about what living with a disability is like is probably very limited,” she explains. “There’s a preconceived idea that disabled people are sad and don’t get outside.  Seeing someone in a ski jacket, teaching, doing a good job, that in and of itself is a really good thing.”

After three years of instructing at Lookout, Ricci is an instructor at Lost Trail this year.  No matter where she teaches, her focus is on making her students’ experience memorable and fun.  “I have the power to make this a good experience that makes them want to come back and ski again,” she says. 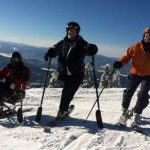 For herself, Ricci marks every “ampu-versary” with a ski trip.  For one ampuversary, she took a four-day weekend and skied four mountains, a different mountain each day.  “I’m a better person now because I’ve lost my leg, and I’m ok with it,” Ricci explains.  “Skiing made me ok with it.  When things are easy, you get complacent and you lose count of your blessings.  Skiing changed everything about how I feel about disability.  As much as it is a thing, it’s not even a thing.”