Scot Browne doesn’t drive anymore.  His depth perception and peripheral vision on the right side have been impaired since suffering a traumatic brain injury in a bmx crash.  “There’s no way I can drive,” he jokes. “I’d be taking out pedestrians right and left.”  Focusing on what he can do as opposed to what he can’t do, Browne perseveres in a self-imposed quest to design and build equipment for outdoorsmen with disabilities.

Browne uses his experience as a machinist and mold maker to design and construct products for people with disabilities.  An incomplete list of his achievements so far includes rifle rests for paraplegics and low-level quadriplegics, fishing-pole holders, flashlight holder mounts for wheelchairs, binocular stands, handrails, and a wheelchair for a kitten (complete with body support).  “I want to help out disabled people, because I’m disabled myself,” Browne explains.  “I know what they’re going through, and I want to make their lives easier.” 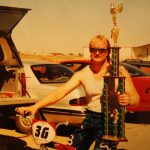 Browne wasn’t always so philanthropic.   Raised in Snohomish, Washington, he attended a two-year vocational school and began working in machine and tooling shops.  By the year 2000, he was 37 years old and working as a plastic injection mold maker in Idaho Falls.  He worked hard, but two to three nights a week were dedicated to racing bikes at the Snake River BMX track.  He excelled at his sport, and he has the trophies to prove it.

Then on June 29th of that year, he was racing a 20-inch bike (the wheels have a diameter of twenty inches).  Normally, he raced 24-inch bikes.  “I was a lot more squirrely on the 20-inch,” Browne remembers.  “I was less used to it.”   What happened next would end Browne’s racing career.  He came down the first straight stretch as fast as he could, and caught too much air on his first jump.  Summarizing what went wrong: “I landed too hard on my back tire, my foot slipped off the pedal and I endoed head first into the second jump. I stood up, then lay down and was out.”  (“Endo” is when the front wheel of the bike stops and the rider goes over the handlebars.)

Browne keeps a photo album of his hospitalization and rehab.  He was in a coma for three weeks at Eastern Idaho Regional Medical Center. One month after his accident, he was moved to the Idaho Elks Rehab Hospital in Boise.  “I had to relearn everything,” Browne recalls. “How to walk, how to talk, how to go to the bathroom.  Thank God it came back pretty fast.”  Discharged after five months, Browne moved to Victor, MT, to help care for his dad and figure out his next move.   In 2005, he started using his dad’s shop to design and build outdoor equipment for people facing physical challenges.  “I’m more positive since my accident,” he says.  “I’m more willing to help people.  Before, I was too busy with my job and racing BMX.  I never thought about helping, or about what it would be like to be disabled.  Now I know.” 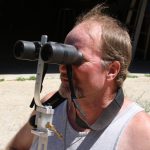 Browne owns and operates Big Sky Imagination. His products are primarily for hunters and fishermen.  “I used to do a lot of shooting,” he explains.  “I wanted people with disabilities to have a chance to get out and shoot, to feel some freedom.”  He has binocular stands, rifle rests, and fishing pole holders in stock, but he is always open to new projects and custom jobs.  Browne believes that keeping his brain challenged has been good therapy.  “If I didn’t have all this work, equipment to run, drafting to do, I’d be a lot worse off,” he advises.  “I’d recommend anyone with a brain injury should get out, get into your shop. Do something, because it gives you hope when you can still do things. It makes you think about your future.”

Shop dogs Zeva and Dakota blink sleepily from their patch of sun on the shop’s concrete floor.  The days in the shop are busy, and they have a front row seat.  Browne makes adjustments on his milling machine, then turns and says, “It gives me hope too. That I can make a difference for someone.”

If you would like to contact Scot Browne about a project or product, you can call (406) 239-8073, or visit www.bigskyimagination.com.