Eleni Comstock is genuine. Real. Take her recent interview with NASA.  They asked if she was interested in space. Her response? No. Today she is working for NASA as a Materials Engineer for the Europa Lander (you know, Jupiter, icy moon, space…).  The thing about Eleni is, if she says she can do something, she can. And if she sees something that needs done, she does it. 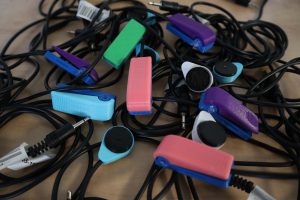 That is why she organized a makers build on the MSU campus this past February. The makers movement encourages people to share ideas, tools, skills, and space for the benefit of others.  Eleni’s inaugural build involved 25 volunteer makers who built adaptive switches to be given at no cost to any Montanan who needs one.  She chose a couple of designs, recruited makers through word-of-mouth, then guided the production of 26 switches.

It wasn’t tough to get people involved.  “Makers tend to hear about an event they think is cool, through the Makers vine, and then they show up in droves,” she observes. “It’s the opposite of engineers. They hear you’re doing something and they get kind of uppity and pretentious. Makers aren’t like that. They want to jump in and help.”

Eleni knows both sides.  Currently completing her engineering tech degree at MSU while working full-time for NASA, her interest in the makers movement is rooted in her own experience with assistive technology.  Diagnosed with scoliosis, borderline Ehlers-Danlos syndrome, and a few other challenges, there are times Eleni uses crutches. Crutches prove tricky during intense Bozeman winters. “I have a shit-ton of disabilities and no money,” she says. “Spikes for crutches would cost a fortune, but if I went to campus and 3D printed spikes, they might cost me five dollars.  If that is a way to help people access the world, then why not do it?”

Why not?  Experiencing downtime during a recent medical crisis, Eleni used the time to explore Makers Making Change and decided to start a chapter in Bozeman. What is the appeal?  “It’s the human connection, connecting the dots that are already there,” she explains. “You have people who need AT (assistive technology). You have academic colleges that focus on enterprise and design. And then students end up working on things that don’t even need to be designed.”  That’s the draw for Eleni.  Utilizing the talents of makers, and maker spaces already available across the state, and collaborating with the end user to build something useful.  “Literally, there are no losers here,” she says. “Everyone gains.”

Eleni graduates this November, but hopes her Makers chapter will continue builds at MSU.  She is currently working with several MSU professors to design a class for industrial engineering masters and Ph.D. students.  The class will incorporate builds that include input from those with disabilities who will be using the end product.  As for Eleni, she’s thinking about her post-grad future and looking for jobs that involve engineering assistive tech. With her in the field, we anticipate great things in the world of affordable, practical AT.

Meanwhile, MonTECH has 26 of Eleni’s switches to give away!  If you or someone you know would like to own a switch or two from Eleni’s build, please write:  shawna.hanson@mso.umt.edu