MonTECH’s Robert Dutreix tested logistics software, engineered live sound for the Austin City Limits Music Festival, and worked a 120-channel soundboard that had previously been used to record sound for George Lucas’ Phantom Menace.  But for all his experience in the world of technology, the niche of assistive technology was a surprise to Dutreix.  “I didn’t even know what assistive technology was,” he said. “Then I got here and realized what I’d gotten myself into.” 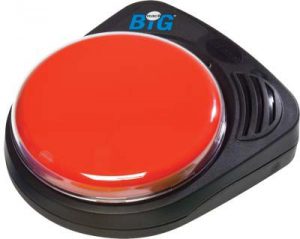 That was Spring 2016, and a lot has changed.  Given his strong background in tech, Dutreix was not impressed, initially, with the AT he encountered at MonTECH. “I thought a lot of it was antiquated, honestly,” he explained. “But then you quickly find out it still serves a purpose.  Like a BIGmack, for example; it’s so simple, but when you see someone using it and the effect it has, it starts to make sense.”  The BIGmack is a large button that can be used to record a message and activate a toy or other appliance. (101 + Ideas for the BIGmack)

As an integral team member involved in countless demonstrations of equipment, Dutreix has seen first-hand the difference AT can make in a person’s life.  “I think when people come in with vision issues, that’s when they can be most outspoken about whether a technology is life-changing,” Dutreix said. “You can see it in their faces. Joy.” 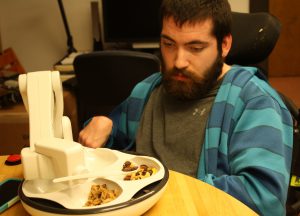 Witnessing the discovery of independence-enhancing technology is a job perk at MonTECH.  Recently, Dutreix demonstrated the Obi robotic feeding device to 25-year-old Devin Armstrong.  He was able to take a bite of food, of his own volition, for the first time in his life. “I was really impressed,” Armstrong said. “It’s too difficult to describe in words, but you could say it was borderline euphoric.”   Asked to rate the value of the feeding robot on a scale of 1 to 10, he pronounced it a 30.  The experience was moving for the whole team.  “That one got to everyone,” Dutreix recalled.

What does he consider the greatest innovation in today’s AT world?  “Anything iPad or tablet related,” Dutreix responded immediately. “You can get an app that can replace a $5,000 device. That’s a game changer.”  The app that most impresses him right now is Seeing AI.  Microsoft released Seeing AI for iOS devices in July 2017. Seeing AI is getting significant attention for features that read documents and barcodes, recognize faces, and describe scenes. In December 2017, more features were added: color recognition, light detection, and handwriting recognition. For those who are blind or have low vision, it’s worth trying because, as Dutreix pointed out, “It’s free AND it works.”

Dutreix is a rolling stone.  He grew up in France and Malaysia, the family following his father’s work as a project manager in pipeline construction.  He considers himself a Texan, but has touched down in Hong Kong, Thailand, Australia, Vietnam, and every country in Western Europe.  The U of M and MonTECH held him for two years, but when graduation rolls around this spring he’ll move on to pursue his dream job in cloud computing.  His advice for anyone interested in increasing independence through assistive technology is simple:  “Every device is different,” he explained. “Every app is different. YouTube is the best way to learn new technology. Or you can call the vendor or developer if you have to. Just dive in and learn it!”