Mathieu Stoker shows me a video of his eight-year-old daughter, Tenley, climbing up on a bench.  Disney’s Moana plays on a television off-screen. Tenley’s progress is painstaking. She has no right arm, a small left arm with one finger, and shorter legs with only one leg bone each.  Climbing up is hard work and requires thought and tenacity.  As the minutes tick by, I anxiously wonder, why doesn’t her dad help instead of filming her? He’s giving her suggestions for ways to get more leverage, but how about giving her a boost?

Four long minutes in, Tenley is up and on the bench with a proud smile. Her accomplishment, made even more dramatic by the coincidental Moana soundtrack, brings me near tears.  Tenley’s dad grins at me. “It’s hard to just watch without helping,” mom Shalenna acknowledges. “But we’ve taught her since the day she was born, if you want something you have to problem solve. It might take you longer, you might do it a little differently, but you can do it.”

Tenley was born at 28 weeks in Missoula. Her parents went in for an ultrasound, not knowing anything was different about the baby they were expecting. “We found out we’re not having a normal kid, and that she’s coming tomorrow,” Shalenna remembers.  Tenley was born the following day via emergency cesarean section, and the fight to get her the medical care and equipment she needs for optimum health and independence was on.

The Stokers have grown accustomed to professionals underestimating Tenley’s abilities.  “The NICU (newborn intensive care unit) doctor told us she’s never going to walk,” Mathieu remembers. “But guess what, she’s figured out how to walk on those one-bone legs. We didn’t push her to walk. She just did it.”  Tenley defies expectations, and in response her parents have grown adept at using their skills and available technologies to increase her independence.

From the start, technology has played a major role in Tenley’s life. When I pulled up to the Stoker house, she was racing around the back yard in her power chair. An Invacare TDX, the chair features a vertical lift platform. Tenley can slide from her seat onto the platform and lower herself to the ground, which means she can get out of her chair independently. “Her power chair has given her legs,” Shalenna says. “She can run it on the blacktop, chasing other kids. She can ride while I bike. She can help us work, hauling pine cones or getting the mail.”

Tenley uses her feet to play brother Nathan on Nintendo Switch, PlayStation, and Nintendo DS, and she’s fond of her iPad for entertainment and filming her own make-up videos. But technology also plays a role in the basic acts of breathing and eating.  Tenley uses a CPAP (Continuous Positive Airway Pressure) machine at night, and has a feeding tube. Making sure she gets enough nutrition has been difficult since day one.

With the goal of eventually removing the feeding tube, the Stokers came to MonTECH to try out Obi, a feeding assistant robot.  Obi is operated by switch control: one switch chooses one of four bowls, the second switch dips a spoon into the bowl and brings it to Tenley’s mouth.  But Obi is expensive, and getting it funded is difficult. Mathieu used his smart phone to project videos of Tenley on the wall during meetings to prove her abilities and support his arguments. “I use video to document our life, and I can use it to our advantage to make cases for equipment,” he explains. After months of effort and the assistance of Disability Rights Montana, the Stokers received an Obi for Tenley this summer.

Obi makes it possible for Tenley to eat without an adult by her side feeding her.  She can feed herself in the lunch room at school, and in restaurants too.  Obi goes where Tenley goes, and she says she feels more comfortable and safer having some control.  “Now no one puts the spoon too far in my throat,” she explains.

Late this summer, Tenley and her family traveled to Seattle to start the process of getting a new robotic arm.  She had one when she was younger, and with it she was able to write her name, use scissors, and hold a cup. She looks forward to doing those things again, but the building process will take months.

Meanwhile, Tenley and her family will continue to “push the limit,” as her dad says.  We stand in the driveway and watch Tenley get the mail out of the mailbox. It takes her longer, it looks different, but she does it.  “Independence doesn’t just happen,” Mathieu tells me. “You have to teach independence.” 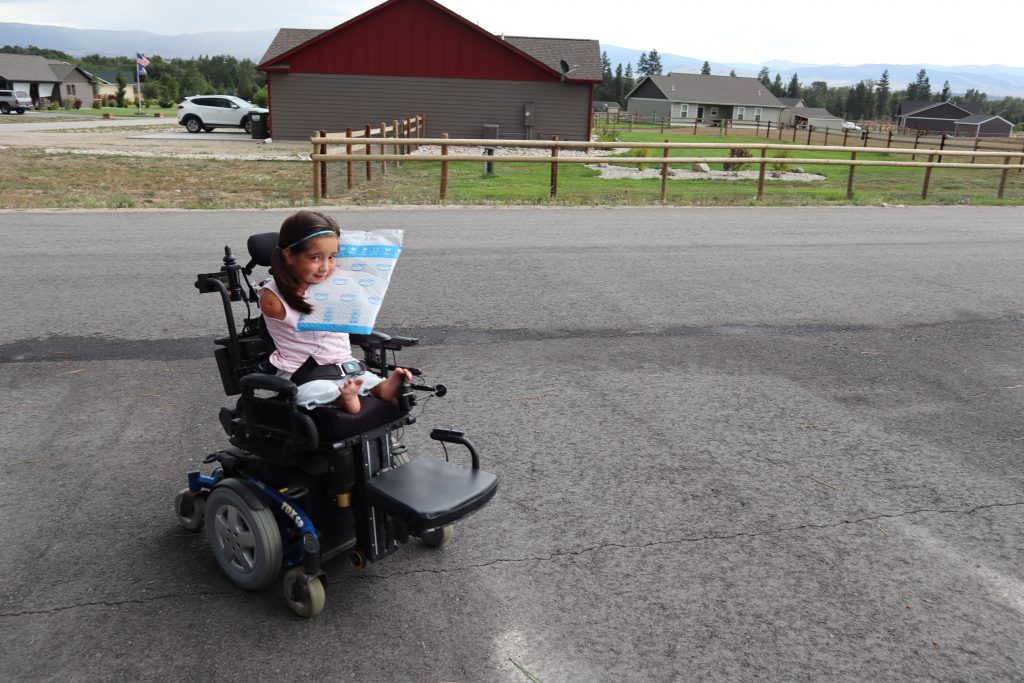