Life with two-year-old Kinsley is a learning curve, and Kinsley’s family members are not the only ones learning as they go.  When Kinsley was born, her newborn cry had a little squeak.  Mom Melissa knew this wasn’t right, but doctors weren’t concerned, telling Melissa her little daughter would ‘grow out of it.’  At five weeks, doctors discovered her vocal cords were covering her airway. Five weeks after that? A terrifying life flight to Denver for an emergency tracheotomy. Everyone learned together, in real time, what Kinsley would need to thrive.

It took a year to get a diagnosis: FoxG1 (a rare genetic disorder causing developmental delays, intellectual disability, and challenges with motor skills) and cortical visual impairment (CVI). The family spent time at Children’s Hospital Colorado at the Rett Clinic to learn more about how to help Kinsley (FoxG1 and Rett syndrome share some characteristics).  It was there that Melissa first learned about switches. 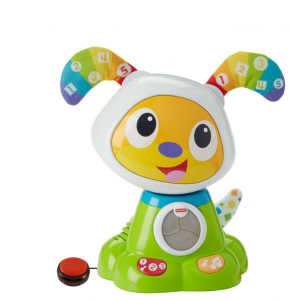 Switches are buttons that allow a user to activate a toy or device, or in more sophisticated form, navigate iPads and computers.  When the family returned home, Melissa remembered thinking, “I don’t even know where to start with this.”

Kinsley’s speech-language pathologist (SLP) set up an appointment with Marlena Lanini at MonTECH’s Billings location to explore switches as well as communication devices and adaptive equipment. With Marlena’s assistance and the participation of Kinsley’s SLP and vision therapist, Kinsley and her mother explored options and chose some to take home and trial more extensively. “Assistive technology (AT) is so expensive, we can’t just buy an $80 switch that’s not going to work for her,” Melissa explained. “It’s been nice that we’ve been able to try out toys that work for her.”

Kinsley has been successful with a Bluetooth switch for her iPad and has explored CVI apps. She has also identified her favorite toys and the family has purchased some of those – with modifications. When MonTECH’s raucous switch-activated “Dance and Move Beat Bow Wow” puppy proved a hit, Melissa opted for the similar ‘Smooth Moves’ sloth. “The puppy was very upbeat,” Melissa said. “But the sloth is, like, let’s chill.”  (Obviously better for everyone involved.) 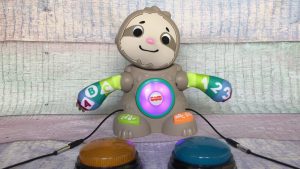 An unexpected benefit, apart from increased independence and more options for Kinsley: Papa has a new mission.  Melissa showed her father the switch-adapted toys. “I said, ‘Look at these. You can figure out how to do this,’” she laughed. “So Papa has taken that on as a project.”

With the help of AT and adapted equipment, Kinsley is better able to learn and interact with her family and environment. MonTECH has played an ongoing role in that. When insurance approval was slow for a gait trainer, she borrowed one from MonTECH while waiting for her own. Currently she’s borrowing a stander, which offers both health and social benefits. “We’re still so new to all of this,” Melissa said. “This isn’t anything I was ever exposed to before.” She’s right about the journey’s fierce learning curve, but MonTECH is happy to be along for the journey.