Charles “Chuck” Webber is no stranger to tough situations. Over 23 years in the U.S. Air Force, he served as navigator on 60 missions during World War II. One harrowing mission required his crew to bomb a railway center near the Vatican.  “If you miss the yards and hit the Vatican, you might as well not come home,” Chuck commented recently. “We hit our target and we missed the Vatican. If we hadn’t, you can imagine what kind of fuss that would have made.”

Well, I’m not sure that I can.  What I am sure of is this:  Chuck Webber is a man of courage and conviction who had a fascinating career.  He is also a straight talker, and when he discusses the hardship of his vision loss, I know he speaks from the heart. 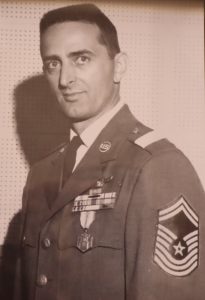 At 99, this New Jersey native now lives in Missoula. He is an avid reader who built a massive library to enjoy in his retirement. “Every time I’d read a book I liked, I would buy a copy for my retirement library. I had a library built up of about 5,000 books,” he said.  Then macular degeneration began stealing away his vision. The loss has been hard to take and is difficult to put into words: “For someone who has been a reader, when you lose your sight, it’s just unbelievable.”

Unable to read anymore, he was thrilled when he received a donated CCTV from MonTECH. A CCTV is a desktop device that magnifies text and changes contrast to improve readability. Perhaps most interesting, this CCTV was donated to MonTECH by the daughter of another 99-year-old WWII veteran, James W. Hahn. Hahn was also a veteran of the Korean War.

The CCTV makes a powerful difference in Chuck’s life, and he’s grateful to the family of James Hahn for the gift. “When you can’t read, and you can’t see people or recognize people, and then you get something like this,” he explained. “Suddenly you can read again and it’s a whole new world.”