As a vision rehabilitation therapist with impaired vision, Shannon Payne doesn’t just talk the talk; she lives it.  “My colleagues can go home and get away from the world of blind and low vision,” she says.  “But I live it 24/7.”

When Payne was 20 years old, a doctor asked her, “Did you know you’ve been visually impaired since the age of eight?”  Payne had been misdiagnosed for years, but on some internal level, she did know.  Growing up, she dreamed of a career as a police officer, but as a teenager she was hesitant to get her driver’s license.  “I just had this gut feeling that I shouldn’t,” she remembers.  Instead, she walked and taught herself to ride the bus, which would serve her well as her vision deteriorated.

Diagnosed with retinitis pigmentosa (RP), Payne spiraled into depression.  “I couldn’t see anymore,” Payne recalls. “I thought, what am I going to do with my life?” Her eye doctor recommended she attend the Braille Institute San Diego Center. Payne attended for four years, including two years as a volunteer teacher. She credits the Braille Institute for influencing who she is today.  “I found my voice,” she explains. “I found my identity. I saw these different people with different stages of vision laughing and enjoying life, and I realized there was something out there for me.” 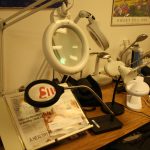 Payne also attended the Davidson Program in Los Angeles.  At Davidson, she received training in Braille, mobility, computers, and daily living skills. There, she discovered her passion for computers and assistive technology.  When she completed her six-month computer class in only two months, her instructor encouraged her to get into the field of teaching and technology.  “I found my love for teaching and learned that I can do it,” Payne says.

In 2006, Payne moved to Montana to finish college. She has been a vision rehabilitation therapist for Vocational Rehabilitation (VR) and Blind Services in Billings for almost three years.  Her job involves visiting home and work environments to assess what a client needs to make working (and living) easier.  The assessment is followed by training in how to use the recommended equipment.

Payne particularly enjoys working with clients in the Older Blind Program, which is open to 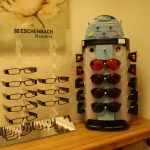 Montanans 55 or older with severe vision impairment. Through the program, participants can try equipment and receive training.  Payne finds it satisfying when a fix can be simple. “I had a gentleman who was a veteran wanting help with learning how to cook…” she remembers. “He was always burning his hands when he cooked anything.  I recommended potholders that are fingered gloves, as well as large-print measuring tools for the kitchen.”

To meet her own vision needs, Payne utilizes a combination of ZoomText and JAWS to complete her work. [ZoomText is a program that magnifies everything on your computer screen. JAWS (Job Access With Speech) is a powerful screen reader. It reads the text on your computer screen aloud.] To minimize glare, she uses an enhanced negative setting (black background with white text).  She also uses a Closed Circuit Television (CCTV) to fill out paperwork and read documents. These tools are critical as she pursues a master’s degree in Vision Rehabilitation Therapy.

Assistive technology also plays a role in Payne’s leisure interests. She admits a harmless addiction to Facebook games and fan fiction. With magnification and the Background Reader feature of ZoomText, she is able to listen to her fan fiction and play games at the same time.  Contrary to many iPhone devotees with low vision, Payne loves her Android smart phone and tablets. “I’m the oddball who loves Android,” she laughs. Payne leans on Google Voice Search, the built-in accessibility feature TalkBack, and several different apps like a bar code scanner and money identifier. 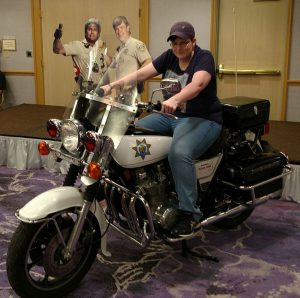 A self-professed TV junkie, Payne travels to television conventions around the country.  She travels solo, but plans carefully.  “I do my research,” she explains.  “I make sure the convention is in a hotel with a restaurant and an airport shuttle or I won’t go. And I will fly in a day early, so I can get oriented to the hotel.”  The conventions are worth a little hassle; Payne has met actors from some of her favorite shows, including Richard Dean Anderson and cast members from Stargate SG-1, Stargate Atlantis, the BBC’s Sherlock, and most recently, the cast from the 1970s cop drama CHiPs.  Payne points out at least one perk of living with the challenges of impaired vision: “My story has gotten me a few free autographs!”

(To learn more about the vision equipment Shannon uses, contact MonTECH at montech@ruralinstitute.umt.edu )