Sara Streeter’s mother was born in 1920 with a congenital amputation of her left arm, just below the elbow.  “She was treated horribly,” Sara said.  “Even in school, the teachers as well as the kids. There was no social consciousness, no ADA.  Her mother knew life was going to be hard, and she always made my mom meet the requirements of the house.”  Sara’s mother not only finished school; she was the only one in her family to go to college.  She earned a bachelor’s degree in advertising, got married, raised a family, and learned to drive at age 45.  “Her life was a series of ‘Ok, how am I going to do this,’” Sara explained.

That problem-solving spirit is conspicuous in Sara as well.  She has lost much of her vision due to degenerative myopia.  Degenerative myopia is the seventh leading cause of legal blindness in the U.S., and the second leading cause in parts of China and Japan. “They don’t have any idea what causes it, let alone how to fix it,” Sara said.

True to her mother’s indomitable spirit, Sara looks for practical ways to adapt to her decreasing vision and to plan for her future.  Although Sara has some vision, she has taken one course to learn Braille and plans to take another.  The correspondence courses are offered through the Hadley Institute for the Blind and Visually Impaired.  Noting that community signage will often incorporate Braille (elevators, restroom signs), Sara feels learning to read Braille might benefit her in the future. “I would prefer to go into the women’s restroom,” she said with a laugh.

MonTECH has played a part in Sara’s quest to maintain her independence. “It was Julie who encouraged me to get my first iPad,” she said.  (Julie Doerner is a Clinical Coordinator at MonTECH.) “MonTECH has technology that I can access as I need it.”

MonTECH has played a part in Sara’s problem-solving of current and future issues, but her husband, Jim, is her go-to guy.  Together, Sara and Jim designed a closed circuit TV (CCTV).  A CCTV utilizes a camera that displays text (or whatever you are trying to see) up onto a large screen.  The user can then magnify that image, adjust brightness and focus, and change contrast.  Quality CCTVs that allow a variety of adjustments run between $1,800 and $4,000.  There are cheaper versions, but they normally have limited magnification options. 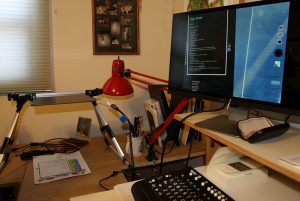 The Streeter’s CCTV consists of an iPad (mounted, but removable), the KNFB Reader app, and a television. Sara can reverse contrast (white-on-black text instead of black-on-white) and adjust magnification, and her homemade CCTV cost just $400 to build.  The Streeters have posted a how-to video on YouTube explaining its construction step-by-step: https://www.youtube.com/watch?v=02qVIO1ylCM .

As an avid cook, Sara’s CCTV is key to ensuring she can continue to access her recipes.  She has re-purchased many of her favorite cookbooks through Kindle.  It is a snap, then, to pull them up on the iPad and magnify them.  For individual recipes she has collected over the years, Sara uploads them to Google drive so that she can access the recipes electronically, then magnify them onto her screen. 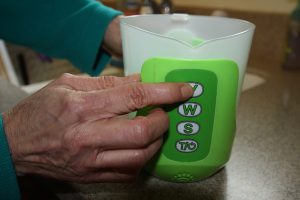 The CCTV meets Sara’s needs beautifully, without the expense of a purchased system. “I just didn’t want to sink several thousand dollars into something, when the technology is evolving so fast. As are my eyes,” she explained.   Jim noted the monitors available to purchase were not an ideal fit for his wife. “We knew those big bulky monitors and stands weren’t going to suit our purposes.  We wanted something portable and reasonable. And we can constantly upgrade the software as it comes out.”

The CCTV is not the only tool ensuring Sara can pursue her culinary interests.  Even a gadget as simple as a liquid level sensor has made a positive difference.  The device sets on the rim of a cup, with two prongs extending inside the cup.  When liquid touches both prongs, the conductivity of the liquid creates a closed circuit and an alarm sounds.  No more pouring with a finger inside the cup to ensure you don’t spill.  “That is the best darn thing,” Sara said. “Now I can pour hot water into a cup without fear, because it will start shrieking at me.”

Sara considers her Reizen ‘Speaks Volumz’ talking measuring cup a kitchen essential as well.  The cup can measure cups, ounces, milliliters and grams. It has a talking base, and a microwaveable and dishwasher-safe cup. 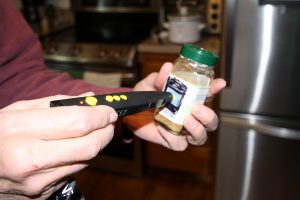 Another great tool that has proven its worth in the kitchen is the PenFriend.  “For example, the ginger and the turmeric are in the same size and shape of container,” Sara explained.  “The PenFriend allows you to record a label and attach it to the item. Then I point the pen at the label, and it will tell me, ‘It’s thus and such.’”  Husband Jim takes it one step further. He records a label, then cuts it in two and puts half of the label on the ginger in the house, and the other half on the ginger in the couple’s camper. The labels for the PenFriend are not expensive, but Jim likes to conserve and re-use when possible.

As they work together to meet the challenges of vision loss, Jim and Sara continue to find practical, affordable fixes.  “I’m just trying to stay one step ahead of this,” Sara said.